Watch This FREE MBE-Style Video to Discover How to

We wrote this MBE-style question as an example of the

The MBE Cram Course is on sale NOW! 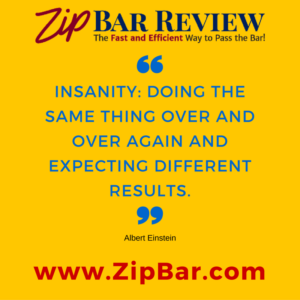 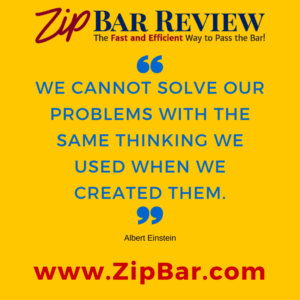 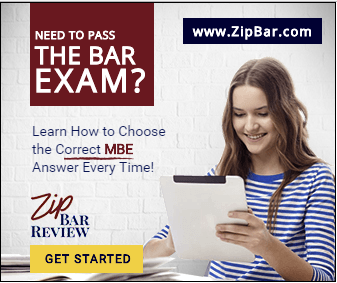 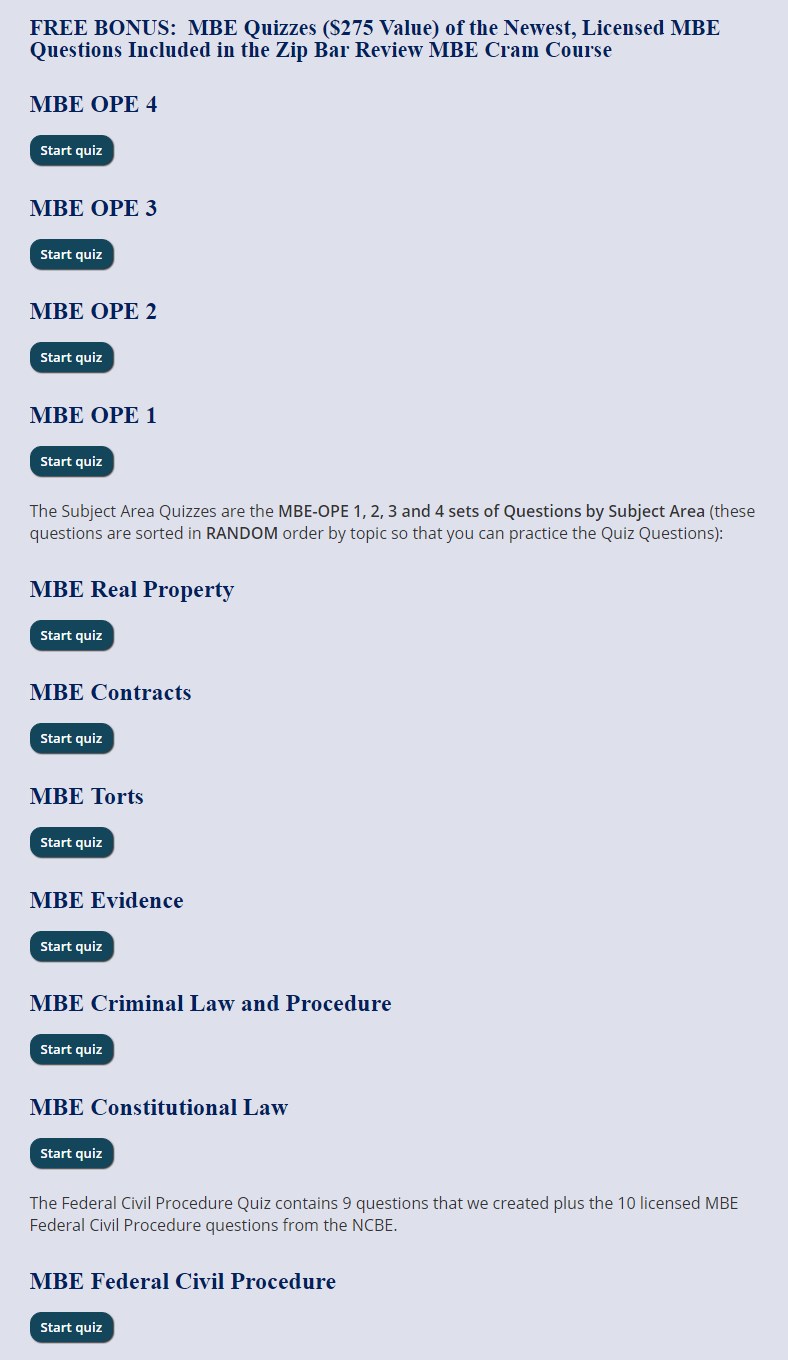 How is Zip Bar Review different from AdaptiBar????

***If you want a TEACHING/TUTORING Program with 30+ hours of MBE Tutoring Videos that have a PROVEN TRACK RECORD TO INCREASE MBE SCORES, Zip Bar Review’s  MBE Cram Course is the CHOICE!***

However, if you want a FANCY Quiz Program,  AdaptiBar would be the choice since Quizzes are AdaptiBar’s core business.

With Zip Bar Review, WE TEACH YOU!

Professor Gachet TUTORS the questions and answer explanations along with the nuances, details and ways to avoid being tricked on the Bar Exam.

With AdaptiBar, YOU TEACH YOURSELF by reading the answer explanations.

We focus on the MBE-OPE questions with LICENSED ANSWER EXPLANATIONS because we have seen that OLD MBE questions can confuse students when they sit for the Bar Exam!

Zip Bar Review and AdaptiBar are both SUPPLEMENTS to a traditional bar course.

Zip Bar Review also has a Quiz Program of the licensed MBE-OPE Questions (400+ Questions of MBE-OPE 1, 2, 3 and 4 sets of Questions).

There are ELEVEN MBE Quizzes INCLUDING SUBJECT AREA QUIZZES FROM THE LICENSED MBE QUESTIONS.

Here is an example of a MBE-style question with answer explanations. 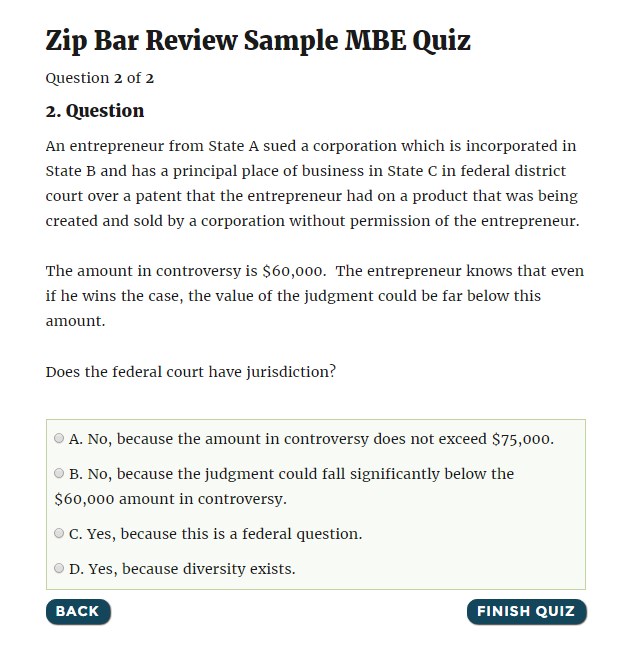 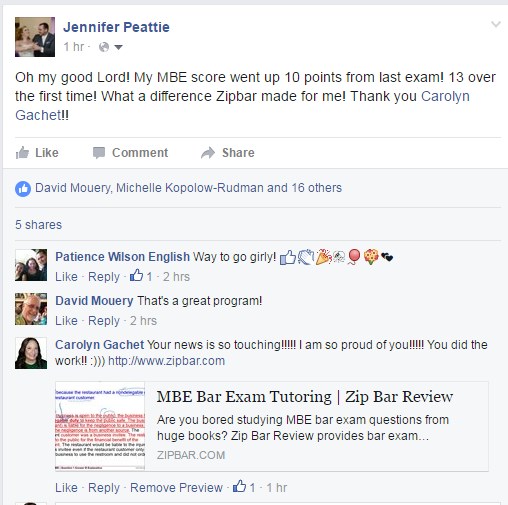 **Retakers:  Your OTHER bar course did NOT work.

You MUST use a different course!

Zip Bar Review is the answer for you!

**This MBE video tutoring course is designed to be used in CONJUNCTION with another bar exam course.

Enter your name and email in the box to the right to get another free MBE tutoring video!

Click the “MBE and MPRE” Tab at the top.

Online membership area includes 30+ hours of MBE question-based analysis Videos and PDFs of the licensed MBE questions provided by the National Conference of Bar Examiners (NCBE) for the following:

PDFs for each of the MBE topics are also provided which include the questions, correct answer selections, and answer explanations for the MBE-OPE 1, 2, 3, and 4 which are provided through a licensing agreement with the National Conference of Bar Examiners (NCBE).

Sample slide of a MBE-style question from the MBE Torts tutoring video:

We know that you have very LIMITED TIME 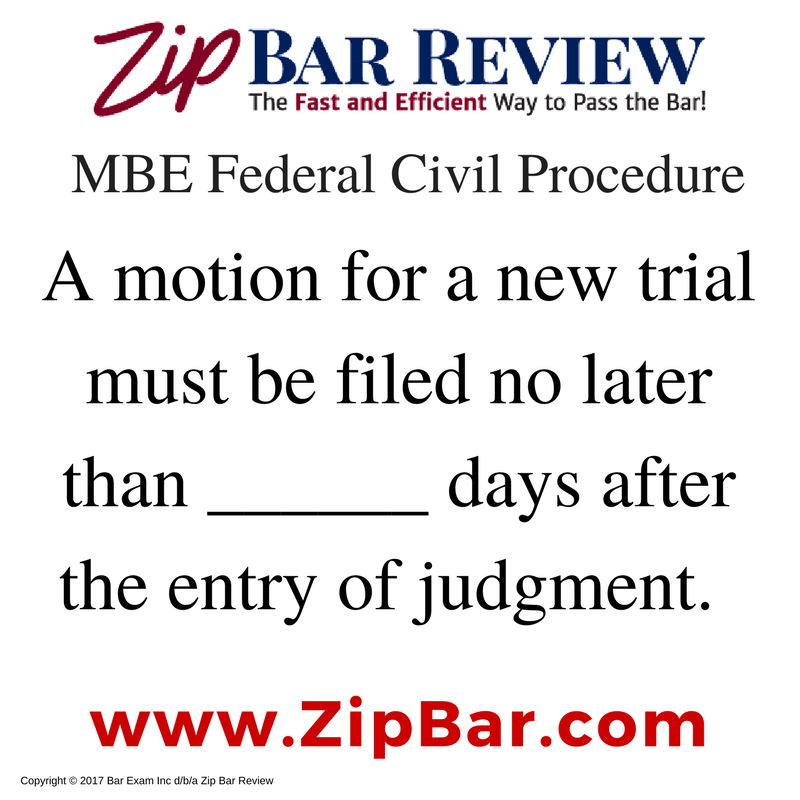 during your bar exam studying.

Don’t stress over your purchase.  Check out the “One More Time Guarantee” information in the Frequently Asked Questions (FAQ) tab.

See you in the membership area!

Please note that the information & instructions on this website are not intended as a substitute for legal advice. The owner disclaims any liability directly or indirectly incurred as a result of the application of any contents of this site or its related materials.

MBE® and MPRE® are trademarks of the National Conference of Bar Examiners.